all mail address your message write your comment show all comments

You have downloaded your files to read and to listen to. Before we will proceed to reading and listening to it we must get some knowledge about 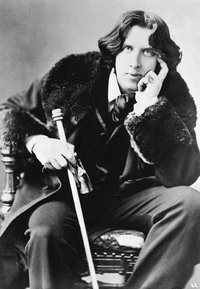 Oscar Fingal O'Flahertie Wills Wilde (October 16, 1854 - November 30, 1900) was an Anglo-Irish playwright, novelist, poet, and short story writer. One of the most successful playwrights of late Victorian London, and one of the greatest celebrities of his day, known for his witness, he became very successful, but later on he suffered a dramatic downfall and was imprisoned for his homosexuality.

He studied the classics at Trinity College Dublin, from 1871 to 1874. He was an outstanding student and was granted a scholarship to Magdalen College, Oxford, where he continued his studies from 1874 to 1878. After graduating from Magdalen, Wilde returned to Dublin, where he met and fell in love with Florence Balcome. She in turn became engaged to Bram Stoker. On hearing of her engagement, Wilde wrote to her stating his intention to leave Ireland permanently. He left in 1878 and was to return to his native country only twice, for brief visits. The next six years were spent in London, Paris and the United States, where he traveled to deliver lectures.

While at Magdalen College, Wilde became particularly well known for his role in the aesthetic and decadent movements. He began wearing his hair long and openly scorning so-called "manly" sports, and began decorating his roomswith peacock feathers, lilies, sunflowers, blue china and other objets d'art.

Wilde was deeply impressed by the English writers John Ruskin and Walter Pater, who argued for the central importance of art in life. He later commented ironically on this view when he wrote, in The Picture of Dorian Gray, "All art isquite useless". This quote also reflects Wilde's support of the aesthetic movement's basic principle: Art forart's sake. This doctrine was coined by the philosopher Victor Cousin, promoted by Theophile Gautier whose novel Le capitaine Fracasse, 1863, you probably know.

The aesthetic movement, represented by the school of William Morris and Dante Gabriel Rossetti, had a permanent influence on English decorative art, especially on the culture of beautiful book. As the leading aesthete, Oscar Wilde became one of the most prominent personalities of his day. Though he was ridiculed for them, his paradoxes and witty sayings were quoted on all sides and also nowadays it would be a proper source of saying of the day for our internet page. Here is the example of book illustration of book in that epoch.

In 1879 Wilde started to teach Aesthetic values in London. In 1882 he went on a lecture tour in the United States and Canada. After his return to the United Kingdom, he worked as a reviewer for the Pall Mall Gazette in the years 1887-1889. Afterwards he became the editor of Woman's World.

He had already published in 1881 a selection of his poems, which, however, attracted admiration in only a limited circle. His most famous fairy tale, The Happy Prince and Other Tales, appeared in 1888. This volume was followed up later by a second collection of fairy tales, The House of Pomegranates (1892), acknowledged by the author to be "intended neither for the British child nor the British public".

His only, but very famous novel The Picture of Dorian Gray was published in 1891. Critics have often claimed that there existed parallels between Wilde's and the protagonist's life, and it was used as evidence against him at his trial.
Wilde's favorite genres were the society comedy and the play. From 1892 on, almost every year a new work of Oscar Wilde was published. His first real success with the larger public was as a dramatist with Lady Windermere's Fan at the St James's Theatre in 1892, followed by A Woman of No Importance (1893), An Ideal Husband (1895) and The Importance of Being Earnest (1895), which became Wilde's masterpiece in which he satirized the upper class. The lecture of these pieces should be decidedly recommended because of simple colloquial language. Reading it you may be enjoying very much. Will you have a fun to do it !

Although the dramatic and literary ability shown in these plays, was undisputed as their action and ideas were characteristically paradoxical, his play Salomé was refused to be produced, but it was produced in Paris by Sarah Bernhardt in 1894. This play formed the basis for one of Richard Strauss' early operas (Salome, 1905).

For the human destiny of Oscar Wilde was deciding Wilde's sexual orientation. He has variously been considered bisexual or gay, depending on how the terms are defined. His inclination towards relations with younger men was relatively well-known but as in the 1891, Wilde became intimate with Lord Alfred Douglas, he had real troubles with it. After various scandals there was the trial. The trial lasted three days. Wilde was sentenced to serve two years hard labor. He was imprisoned at Reading, a town some 30 miles west of London. At first he wasn't even allowed paper and pen to write. During his time in prison, Wilde wrote a 30,000 word letter to Douglas, which he handed to Ross, who sent a copy to Douglas. It was published in 1905 (4 years after Wilde's death) with the title De Profundis

Prison was fatal to Wilde's health and when he was released on May 19, 1897 he spent his last three years penniless, in self-inflicted exile from society and artistic circles. He went under the assumed name of 'Sebastian Melmoth', after the central character of the gothic novel Melmoth the Wanderer. After his release, he wrote the famous poem The Ballad of Reading Goal. On his deathbed he converted to the Roman Catholic church, which he had long admired. He spent his last days in Hotel d'Alsace in Paris. He is reported to have said shortly before his death, "My wallpaper and I arefighting a duel to the death. One or other of us has got to go."

Wilde died of cerebral meningitis on November 30, 1900. Wilde was buried in the Cimetiere de Bagneux outside Paris but was later moved to Le Pere Lachaise Cemetery in Paris. His tomb is in this cemetery where I was many years ago to visit the tomb of Henrich Heine and the monuments of Communards.

If you are interested in, you may find all the works of Oscar Wilde as PDF-files on internet address: